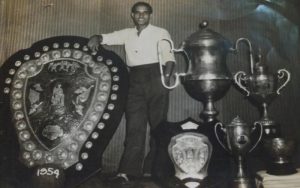 The All India Football Federation condoles the death of former India captain Samar ‘Badru’ Banerjee, who passed away earlier this morning (Saturday, August 20, 2022) in Kolkata.

Popularly known as Badru Banerjee among his teammates and fans alike, the former India forward had captained the National Team to a fourth-placed finish in the 1956 Melbourne Olympic Games, which also included a famous 4-2 victory against hosts Australia in the quarterfinals. Banerjee played a total on nine matches for the Blue Tigers, and scored three goals for the country.

“It’s sad to hear that Badru-da, one of India’s Greatest Footballers, is no more. His contribution to Indian Football will never be forgotten. I share the grief,” said AIFF Acting General Secretary Sunando Dhar. “He will stay synonymous with the golden generation of Indian Football. Badru-da, you will remain alive in our hearts.

“Badru da will be alive in his achievements. He was a legendary footballer and someone who has been an inspiration to so many generations. May he Rest in Peace.”

As a mark of respect, a one- minute silence will be observed in the Durand Cup matches in Imphal and Kolkata today.