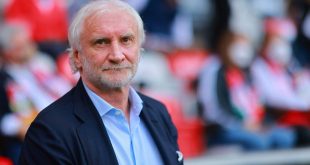 Alexandra Popp’s eventful year is behind her. After winning the league and cup double with her club VfL Wolfsburg, the striker led Germany during the UEFA European Championship, scoring six goals and reaching the final in which England were unfortunately too strong for German who had to do without the injured Popp – losing 2-1 after extra time. ‘Poppi’ was, nevertheless, one of the most defining faces of Germany women last year and played a huge part in the radically heightened perception of German women’s football.

And 2023 has continued in the same positive vein for the 31-year-old Germany captain. After being shortlisted for FIFA’s World Footballer of the Year Award 2022 and winning the “Germany Women’s Goal of the Year 2022”, the next prize came from the users of the Germany Fan Club on DFB.de: Popp has been named National Player of the Year 2022 after receiving 28.4% of the votes cast.

Lena Oberdorf came in second place. The midfielder, who was also nominated for FIFA’s World Footballer of the Year Award, received 23% of the votes cast. Giulia Gwinn came third with 20.7%. There were over 8,000 votes cast by the end of the year. Thanks to their spectacular run at this summer’s Women’s EUROs in England, where they finished …