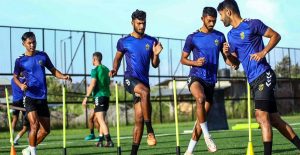 The 2022 Durand Cup Group C leaders Hyderabad FC are back in action, for one last time in Imphal when they take on Army Red Football Team in an exciting clash at the Khuman Lampak Stadium on Saturday.

Having registered three wins in their first three games, Hyderabad FC have already cemented their place in the knockout phase of the competition but will look to sign off from Imphal on a positive note.

Army Red are yet to register a win in this competition and have just two points from their three group stage games. They are fresh from the loss against TRAU FC in the previous round and will look to bounce back in this game. The Services side are mathematically still in with a chance to qualify but need to get a win and depend on the result in the final game between Chennaiyin FC and NEROCA FC in Group C.

But Manolo Marquez’s side has been in fine form this campaign, with the likes of Bartholomew Ogbeche, Javi Siverio, Joel Chianese, Borja Herrera, Joao Victor and Odei Onaindia all getting crucial minutes under their belt in the last three games.

Ogbeche is currently the top goalscorer in the competition, with four goals to his name in just three games. But the Head Coach has used a variety of options in the Durand Cup so far and with qualification already secured, we could see a few more changes to the side in this game.

Hyderabad FC have scored eight goals, the second-best tally in the competition, and have conceded just one, standing as the joint best defence in the competition so far. They will look to keep up the momentum and gather confidence going into the quarterfinals later this month.

The fans at Manipur also played their role in making the first three games special and with HFC in action for the last time here this season, the Khuman Lampak Stadium could once again be full and have an effect on this clash.

The game kicks off at 3pm IST, and will be telecasted live on Sports 18 and streamed on the VOOT app.