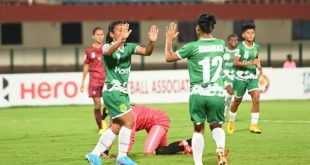 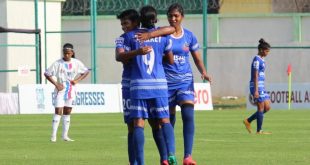 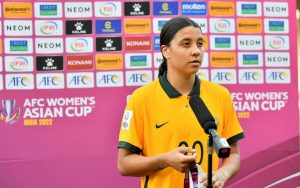 India’s participation in the tournament came to an end on Sunday, when COVID-19 cases and injuries meant they were unable to name the minimum 13 players required for their match against Chinese Taipei, leading to their withdrawal.

Currently leading the tournament’s scoring charts with six goals from two matches, Kerr sympathised with the team’s plight, urging them to use the setback as motivation for the future.

“I just wanted to say how sorry I am for the situation you guys are in right now,” the Australian captain said in a video message posted on social media.

“I’m so disappointed for you guys, I know you’ve been working so hard for this tournament.”

Kerr, who has family roots in India, is a popular figure among football fans in the country, and has starred in her first two appearances in Mumbai.

Last week she reflected on the significance of playing a major tournament in the country that was once home to her grandparents and father.

“It’s special,” said Kerr, after being voted Player of the Match, against Indonesia last Friday. “I definitely thought about that before the game; how special that would be for my family that I’m in India.”

“It’s my first time here, so – even just seeing the culture and, when we drive here, looking outside and seeing the people – everyone has been so welcoming, and I know that there’s a lot of Indian fans out there that follow me.”