Bengaluru FC bow out of U-15 JSW Youth Cup with 0-3 loss to RoundGlass Punjab FC! 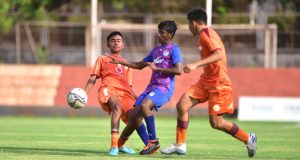 Bengaluru FC bowed out of the U-15 JSW Youth Cup with a 0-3 semifinal loss to RoundGlass Punjab FC in Bellary on Saturday. Thangsuanpien Samte (45′), Longjam Dinar Singh (45+1′) and Khulakpam Musaraf (90+1′) got on the scoresheet to record a comfortable victory over the Young Blues.

The game began with the Young Blues on the front foot, with a lot of possession and activity around the 18-yard-box. Lalpekhlua came close on multiple occasions, and almost broke the deadlock, but Jaskaran Dub was in top form in goal and denied everything that came his way.

Close to the end of the first half and against the run of play, RoundGlass Punjab FC opened the scoring. An audacious effort from Samte had Atul rooted to his spot as the ball hit the inside of the post and found the back of the net. It went from bad to worse for Bengaluru as RoundGlass Punjab FC doubled their lead a minute after the opener. Longjam was put through on goal and the defender slotted it past the goalkeeper and into the bottom corner.

Bengaluru had RoundGlass Punjab FC against the ropes and kept the ball in their half in the opening stages of the second period, and there were plenty of chances for the Young Blues to reduce the deficit, but Punjab’s defence remained solid.

RPFC were on the counter and Pyrkhatshaphrang Sumer was fouled inside the box by the BFC goalkeeper and won his side a penalty. Atul had to come off injured and was replaced by Rohen Singh Narengbam, the substitute made an incredible save from the spot and kept his side in the game.

RoundGlass Punjab FC however, scored from a counter attack once again and sealed their spot in the U-15 JSW Youth Cup final, where they will face Sports Odisha.

Bengaluru next face Reliance Foundation Young Champs in the third place playoff on May 16 at the same venue.