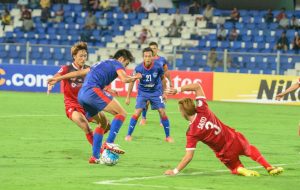 Bengaluru FC sealed a spot in the Round of 16 of the 2016 AFC Cup after goals from Eugeneson Lyngdoh (45th) and Kim Song Yong (60th) in either half gave Bengaluru FC a 2-1 win over Lao Toyota FC at the Sree Kanteerava Stadium in Bengaluru on Wednesday.

Three points confirmed second place in Group H for the I-League champions with a game in hand against Group leaders and Cup holders Johor Darul Ta’zim of Malaysia. Bengaluru’s opponents will be the leaders of Group F where the battle to pole position is a three-way race between Kitchee (Hong Kong), Kaya (Philippines) and Balestier Khalsa (Singapore) that will be decided in the last round.

The game got off to a rather somber start with Bengaluru FC happy to ping the ball around and keep as much possession as possible while looking for an opening between Lao’s defensive lines.

Bengaluru FC began mounting the pressure as the half wore on with Udanta Singh and Sunil Chhetri finding themselves in dangerous positions in the Lao box only to scuff their shots wide. Kim Song Yong then set off on a brilliant solo run from the half line to the Lao box only to shoot over.

But the surge did enough to suggest a Bengaluru FC goal and Lyngdoh picked the first minute of added time to strike. A set of swift passes saw Michael Collins float in a cross from the right as Lyngdoh rose and sent his gracefully glanced header way beyond Vathana Keodouangdeth’s reach.

Bengaluru FC made it 2-0 on the hour mark when Chhetri squared Lyngdoh’s pass to Kim who finished without ado. The North Korean striker had, only a minute earlier, unselfishly teed up Udanta who was inches away from getting a touch with an open goal at his mercy.

But Lao soon pulled a goal back against the run of play when striker Kazuo Homma rose to head in a free-kick in the 67th minute to make it 2-1. The goal was followed by the sending off of Ashley Westwood after he protested about Lao Toyota taking the free-kick 10 yards ahead of the spot from where it was awarded.

Hopes of a Lao comeback were dealt a hurdle with when the visitors were reduced to 10 men at the death after defender Saynakhonevieng Phommapanya received his marching orders. The side from Laos tried to work out an opening as the game meandered to its end but the Bengaluru FC defence and goalkeeper Amrinder Singh held strong, decisively claiming speculative long balls in and around the Bengaluru penalty box.