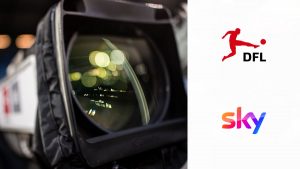 Bundesliga International, a subsidiary of the DFL Deutsche Fußball Liga, has agreed a four-year deal with Sky Italia up to the end of the 2024-25 season.

The new deal, which begins with the 2021-22 season, includes rights to both Bundesliga and Bundesliga 2 matches, the Bundesliga relegation play-offs, and the German Supercup, as well as additional magazines shows such as the highlights and “Bundesliga Weekly” programmes.

As one of Italy’s most renowned sports broadcasters, Sky Italia will continue to show the German top flight on its subscription channels, as well as utilising its full range of digital and social platforms to promote the Bundesliga. In addition to the live broadcasts, Sky will produce a weekly live segment dedicated to the Bundesliga, as part of its international football show EuroShow, aired on the broadcaster’s sports news channel Sky Sport24. Furthermore, Bundesliga International and Sky Italia will work in parallel to create more content opportunities, bringing the league’s biggest names closer to supporters throughout Italy.