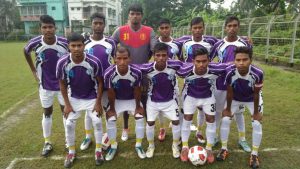 Former I-League side United SC had to be satisfied with a draw in their fifth Calcutta Football League – Premier Division ‘B’ match against George Telegraph SC at Kankinara Narayanpur on Thursday afternoon.

The match was played mainly in midfield in the 30 minutes with United SC only scoring an offside goal through Rana Pandey. It remained goalless at the breather.

Things did not change after the break as both sides continued to press their opponent but both United SC and George Telegraph SC couldn’t score. The Purple Brigade created few good chances in the second half with the two best chances coming in the 71st and 80th minutes which could have given them a lead in the match but they could utilised the opportunities.

At the other end, George Telegraph SC also had a few good chances but like their opponents they failed to get the best out of it.

With this point United SC move to nine points from five matches in the Calcutta Football League – Premier Division ‘B’ and they stay in second position, three points behind the leaders.

United Sports Club will play their next match in the Calcutta Football League – Premier Division ‘B’ against Kalighat Milan Sangha at the Gayeshpur Stadium on September 3 at 2.45pm.