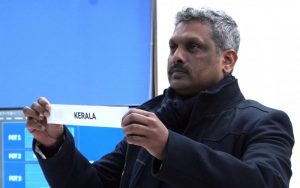 The draw ceremony for the final rounds of the National Football Championship for the 76th Santosh Trophy took place at the Federation’s headquarters, the Football House, on Thursday, January 19, 2023. The draw, part of the revamped format for the prestigious tournament, was conducted in the presence of Secretary General Dr Shaji Prabhakaran.

“The five groups, conducted so far, have been a hugely competitive affair, and I expect no less from group 6 which will commence in Manipur in a few days’ time,” Dr Prabhakaran said, welcoming the representatives of the state associations to the draw ceremony, “I wish all the teams good luck and have no doubt that the most deserving four will earn their ticket to Saudi Arabia where the semi-finals, third-place playoff and final will be played next month.”

Defending champions Kerala were the first team to come out of the pot, placed in Group A, alongside Karnataka, Maharashtra and Goa. The winners of Group VI — which will commence in Imphal on January 22 — will also be placed in Group A. The hosts for the final round of the tournament, Odisha, are also placed in Group A.

Group B consists of the previous edition’s runners-up Bengal, Delhi and Meghalaya as well as the two direct entrants, Services and Railways. The runners-up of Group II or Group IV — depending on a better record as per regulations — will make up the final spot in this group.

Speaking after the draw, Dr Prabhakaran hoped the final rounds would match the intensity and quality of the group stages. “It will be an exciting final round, and defending champions Kerala will be up against it, in a tough group,” he said. “We always expect quality teams from Maharashtra and Karnataka (who reached the semi-finals last time around), and with the hosts also in that mix, it should be exciting.

“In the other group, Bengal, Services and Railways are obvious candidates for the title, but I would also like to pay a compliment to Delhi, who have surprised many by qualifying for the final round. I look forward to an exciting end to this new format of the tournament.”

February 13:
Bengal vs Services
Meghalaya vs Runners Up Group II/VI
Delhi vs Railways

February 15:
Services vs Delhi
Railways vs Meghalaya
Bengal vs Runners Up Group II/VI

February 18:
Runners Up Group II/VI vs Services
Railways vs Bengal
Meghalaya vs Delhi

February 20:
Services vs Railways
Delhi vs Runners Up Group II/VI
Bengal vs Meghalaya