Delhi Dynamos FC to conduct trials for their Under-16 boys teams! 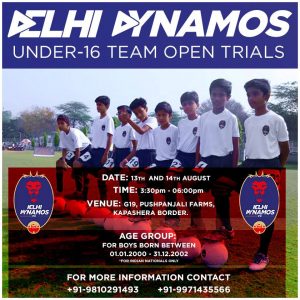 Indian Super League franchise Delhi Dynamos FC will be holding open trials over the weekend August 13/14 for boys to be part of the DDFC Under-16 team, which will be participating in the AIFF Under-16 Youth League.

The trials will be held from 3.30pm to 6pm on both days at the G19, Pushpanjali Farms, Kapashera Border in New Delhi.