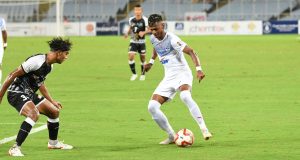 Bengaluru FC striker Sivasakthi scored for a third time in as many games, slotting home a late equalizer in a 1-1 draw against Mohammedan Sporting at the Saltlake Stadium in Kolkata on Friday.

The encounter, which saw the Black Panthers take a first half lead through Pritam Singh (13′), was the Blues’ final encounter in Group A, where they finished runners up with eight points to set up a quarterfinal clash against Odisha FC.