Dylan Fox – The new rock at the Jamshedpur FC back!

Press Release 2022-12-31 Indian Super League Comments Off on Dylan Fox – The new rock at the Jamshedpur FC back! 609 Views 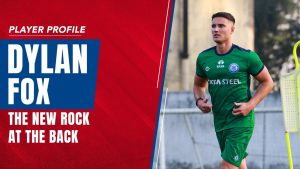 As the Indian Super League season kicks into a higher gear, the second half of the campaign promises big things for Jamshedpur FC.

The Men of Steel ended their seven match losing streak with a gutsy 2-2 draw against FC Goa last time out, and despite a feeling that the game could have been won, a ray of positivity is undoubtedly spreading across the contingent.

A ray of positivity has also arrived in the form of another new signing, with Dylan Fox making his way to the club to replace former captain Peter Hartley in the centre of defence.

Fox looks like just the kind of player Jamshedpur FC needs at the moment. His reading of the game is second to none, and despite a smaller stature as compared to his defensive partner Eli Sabia, his crisp passing ability and excellent positional sense makes for some exciting viewing.

The Australian has certainly been around the block. Starting his youth career at Sutherland Sharks, he came up the ranks down under with Bonnyrigg White Eagles and flourished at Kiwi side Wellington Phoenix, where he moved up from the reserves to the first team, also winning accolades such as the U-23 player of the year in 2016 and player’s player in 2017-18.

His return to Australia with the Central Coast Mariners put him on the radar of ISL clubs, and the 28-year-old sealed a move to NorthEast United FC in 2020.

His 21 appearances in a single season were enough to prove his importance to other Indian clubs, and a move to FC Goa followed in 2021, where the defender once again shone.

Having made 10 appearances and scoring a goal for the Gaurs, fitness played a part in his time on the pitch, but a move to Jamshedpur FC is now an opportunity for a fresh start at a crucial time for the club.

Fox might well make his debut for the team against Kerala Blasters on January 3, and fans can expect some fireworks with the Aussie primed and ready to make an impact during the second half of the ISL campaign.

🎙 Dylan shares his thought after his first training with the Men of Steel.#JamKeKhelo pic.twitter.com/VkQq3TOOuW