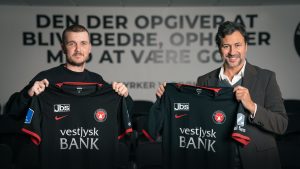 FC Midtjylland’s coaching team is once again complete after the departure of Henrik Jensen and Michael Silberbauer. New assistant coaches of the FC Midtjylland first team will be the 54-year-old Catalan Carles Cuadrat and 42-year-old Niels Lodberg.

The two assistant coaches Henrik Jensen and Michael Silberbauer left Central Jutland at the end of December when they were hired as head coaches at Kalmar FF and FC Utrecht, respectively.

Since then, efforts have been made to find the right candidates to complete the coaching team around head coach Albert Capellas.

“Together with Albert, we have had a constructive and thorough dialogue about what skills we are looking for in our coaching team,” said Sports Director Svend Graversen and continues:

“Since the sale of Henrik Jensen and Michael Silberbauer, we have worked intensively to find the right constellation around the team. We are very pleased that we have managed to quickly find two talented assistant coaches.”

“It is gratifying that we have been able to sell two talented coaches for head coaching jobs around Europe, while at the same time we have succeeded in finding two highly competent replacements in the form of Carles Cuadrat and Niels Lodberg.”

Catalan Carles Cuadrat has a shared past with Albert Capellas, as the former was a player and captain of Spanish Gavá in the early 1990s, while the FCM head coach was an assistant. Carles Cuadrat’s coaching has included stints at FC Barcelona, Galatasaray, Bengaluru FC and Greece as an assistant, head coach and in other roles.

“Carles Cuadrat has been recommended by Albert. He is a competent coach who has shown both his skills as an assistant coach and head coach in many different places in the world. We have had some good talks with Carles and we are confident that he will be a successful addition to our already talented staff.”

“Niels Lodberg has a great ambition for the coaching profession, and he has proven himself as a competent and skilled assistant coach in both AC Horsens and SønderjyskE. He has received good recommendations from all those we have talked to, and this has been confirmed in the conversations we have had. He comes with something different than what the rest of the coaching staff possesses, and in that way he fits in perfectly.”

Carles Cuadrat and Niels Lodberg have both had their first day of work and will be there tomorrow when the squad trains together in Ikast.