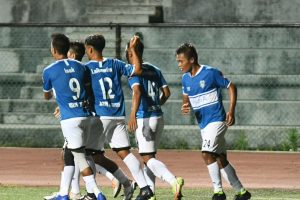 A brace from Lalbiakdika ensured a first victory for FC Bethlehem in MPL9 in a 2-1 win against Chawnpui FC.

FCB struck early on in the game with Lalbiakdika applying the finishing touches in the 6th minute. And he was on hand again in the 33rd minute to give his side a two goal cushion in the first half.

Chawnpui FC improved after the break and they managed to pull one back through David Laltlansanga which ensured a nervy finish to the end.

The win sees FC Bethlehem level on points with their opponents after round 4.