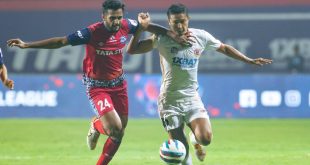 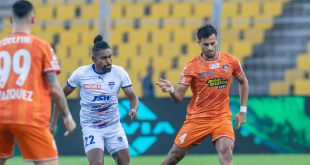 Goals in the second half by Aibanbha Dohling and super-subs Fares Arnaout and Noah Sadaoui helped FC Goa register an emphatic 3-0 win over ATK Mohun Bagan at the Pandit Jawaharlal Nehru Stadium in Fatorda on Sunday.

The victory also resulted in the end of the Mariners’ unbeaten run over the Gaurs, which had lasted for two seasons since the former’s inception.

Earlier in the day, FC Goa Head Coach Carlos Pena rang in two changes to the playing XI that started in the defeat against Kerala Blasters, as Redeem Tlang and Marc Valiente replaced Noah Sadaoui and the injured Saviour Gama, respectively. The return of the Spaniard bolstered the Gaurs’ defence.

The first half saw the hosts dominate most stat charts with Pena’s boys maintaining 58% of the ball possession, playing nearly double the number of accurate passes as their opponents, with four shots on target during the period.

It all began in the 2nd minute itself, when a sumptuous long ball forward from Edu Bedia in the midfield found Alvaro Vazquez, who advanced into the ATKMB box and pulled the trigger, forcing Vishal Kaith to make an equally brilliant diving save.

Three minutes later, both Iker Guarrotxena and Bedia tested the 26-year-old shot-stopper in quick succession, but the opening goal continued to remain elusive.

In the 22nd minute, when FC Goa finally managed to put the ball into their opponents’ net courtesy of a tap-in by Vazquez, the goal was ruled out because of an off-side call by the referee. This did not deter the Men in Orange as they continued to create chances at will, and ultimately ended the first half on a promising note.

Following the change of ends, it took only five minutes for the Gaurs to get the much-awaited lead. It was orchestrated by Anwar Ali, who spotted Aibanbha Dohling’s run on the left wing and put a diagonal long ball into his path, only for the latter to outrun the defender, go towards the goal and squeeze a shot into the top right corner of the net from the tightest of angles.

The goal put ATK Mohun Bagan further on the back foot, and that they could not win the ball back from FC Goa did not help their cause either.

Soon afterwards, Pena brought Fares Arnaout and Noah Sadaoui on from the bench, in what eventually proved to be a tactical masterstroke. Both players found the back of the net in a space of six minutes and put the game to bed.

Arnaout’s strike came first, in the 76th minute. Edu Bedia found himself in the thick of things once again, as he launched a corner-kick on to the near post, and the Syrian international in turn escaped his marker before nodding the ball home.

The final nail on the Mariners’ coffin was driven in by Sadaoui in the 82nd minute, when he caught goalkeeper Kaith out of position and drilled one in from over 30 yards out.

Special mention must go to FC Goa’s defence, whose astuteness was rewarded with a clean-sheet, their third of the season. The victory, meanwhile, puts the Men in Orange at third place with 12 points from six matches.

Up next for Carlos Pena’s boys is yet another assignment at home, against Bengaluru FC on Saturday, November 26.

Previous Kenkre FC confident of a win as they face TRAU away from home!
Next 442oons VIDEO: Road to the FIFA World Cup – Ep.1 (Parody)!