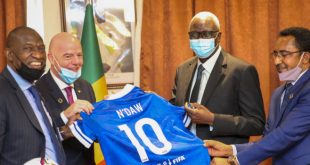 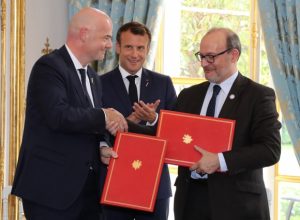 FIFA and the French Development Agency (Agence Française de Développement, AFD) today signed a landmark agreement, three days before the FIFA Women’s World Cup kicks off in France, that will see the two organisations work together to create positive change in society and communities through football.

Signed by FIFA President Gianni Infantino and AFD CEO Remy Rioux at a special ceremony at the Élysée Palace, the agreement aims to develop collaboration between FIFA and AFD for the implementation of various social projects related to football, including the development of women’s football and the Football for Schools Programme.

FIFA and the AFD will be partners and cooperate on joint projects in Africa with two main objectives:

President Macron has said that equality between women and men is the great national objective of his five-year term. The AFD has a strategic objective called a “100% social link”, in particular through the inclusion of women and the fight against gender inequality. In terms of empowerment, the AFD will promote women’s participation in sport and partner with FIFA to implement FIFA’s new strategy for women’s football.

FIFA’s 2016-2026 road map, “FIFA 2.0: The Vision for the Future”, sets out several tangible and measurable goals for the development of football, among which is a commitment to significantly raise the number of women and girls playing football, up to 60 million. As part of its new vision, FIFA adopted a strategy for women’s football in October 2018 with the aim of developing the women’s game and using football as a powerful unifying factor and tool to bring about positive societal change, to fight inequality and to empower girls and women around the world.

School is “where we build the society we need and want to see” (President Macron at the opening of a preschool assembly). In this respect, sport is a vehicle for keeping or bringing young people back into the education system, fostering interculturalism and solidarity and transmitting fundamental values to build a world of peace, equality and respect.

FIFA, through its Football for Schools Programme, aims to reach over 700 million girls and boys around the world and invest USD 120 million over the next four years with the overall objective of making football more accessible to children everywhere and contributing to their education, social development and empowerment.

FIFA and the AFD will combine resources and implement joint programmes to promote football as a sport for all, socio-educational projects and equality in football, as well as invest in local infrastructure. These initiatives will run alongside existing programmes being carried out by the AFD as well as ongoing projects in member associations as part of the FIFA Forward development programme and the FIFA Football for Schools Programme.

FIFA President Gianni Infantino said, “I am happy that today, another strategic alliance has been forged to help use football as a platform for positive change in society.”

“This landmark agreement between FIFA and the AFD aims to make a lasting difference to communities around the world, as well as ensure that football continues to play an even more important role in sustainable development, educating and empowering the next generation to help build a fairer, more peaceful society.”

AFD CEO Remy Rioux said, “What better way to build a world in common than by leveraging the unifying power of football? Sport is at the crossroads of all Sustainable Development Goals – including economic growth, women’s empowerment and access to education – yet the worlds of football and development finance have not been linked until now. I am therefore extremely proud that the AFD and FIFA are today launching a unique partnership to promote gender equality and foster education in Africa through football. As theWomen’s World Cup is about to kick off in France, I am confident that the AFD-FIFA alliance will help to showcase women’s sport as a strategic development objective in Africa. This compelling agreement is already paving the way for inventive solutions on the ground such as ‘playdagogy’ projects designed to ensure that young Africans will not only benefit from the 2030 Agenda for Sustainable development, but also become key advocates of SDGs.” 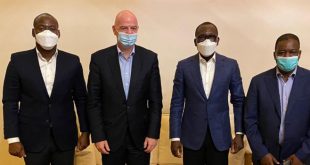