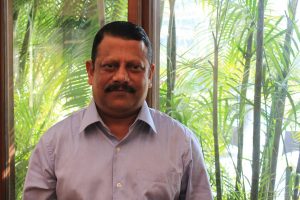 Komaleeswaran Shankar who stays the sole Indian Assistant Referee to have officiated in a FIFA World Cup says that he has been closely following Indian referees and that “Indian Referees are doing an excellent job.” In an interview with AIFF Media, Shankar speaks at length about Indian referees, their achievements, the development programme of AIFF, Uvena Fernandes’ achievement and how would he like to be associated with refereeing in India.

Where are you based now?

I am based in Kuala Lumpur for last three years, and I’m working with the Asian Football Confederation as the Referee Development Officer. I am shifting to my hometown in Chennai but will continue to be associated with the AFC as an instructor, assessor and recruiter.

What stays your assessment of Indian referees?

I can proudly say from my experience that Indian referees are doing an excellent job now. FIFA Referee Pranjal Banerjee and FIFA Woman Referee Uvena Fernandes have impressed me very much.

As far as the AFC Project Future is concerned, Rupa, Monica and Venkateshan have come up with noteworthy performances, much to the delight of all AFC officials.

So you feel Indian referring is on the upsurge?

Education is important for the referees, not just in India but all over the World. The AIFF has been trying to strengthen the base conducting many educational courses for the grassroots referees, and at the same time trying to look at the top of the pyramid conducting many FIFA and AFC Courses at the same time. FIFA Head of Referees Massimo Busacca was also very impressed when he visited India for the first time last year.

But the generic view stays that nothing much has progressed among Indian Referees despite all the courses.

Indian Referees are supervising a lot of ACL and AFC Cup matches and along with many other FIFA matches too. Then you have an Indian Woman Referee who has supervised the FIFA U-17 Women’s World Cup Jordan 2016. If that isn’t any progress, what else is?

Do the courses help? What is taught?

Education can be imparted by AIFF, AFC and even FIFA to a certain extent and such courses are responsible to educate referees and referees administrators. The ball then is rolled into the court of the State Associations and the head of the State Referees development to develop their own referees and follow the educational courses.

The course material of the courses stays simple – to enlighten the attendees about what is going on all around the world.

How big is Uvena Fernandes’ achievement?

It’s a huge achievement for Indian refereeing fraternity and AIFF. The vision of AIFF clubbed with Uvena’s hard work and discipline enabled her to reach this level. She has the calibre to scale greater heights.

You speak of AIFF’s vision. Can you elaborate?

Recently in 2016, Bhaskar from Tamil Nadu and Maria Rebello from Goa were selected as AFC instructors. I tell you, it’s not easy to reach that level. AIFF’s effort has motivated people and opened the doors for Indians to reach the level.

Now that you are back in India, what you like to give back to refereeing?

Without AIFF’s help and support I couldn’t have reached where I have. I am loyal to the AIFF and want to share my experience and knowledge with Indian referees in their pursuit to become better ones.