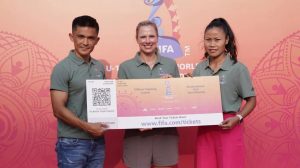 General sales open today for first-come, first served tickets for the highly-anticipated 2022 FIFA U-17 Women’s World Cup – India. With three months to go, fans can now purchase their tickets for any of the 32 games of this festival of women’s youth football.

Minister of Youth Affairs and Sports and Information and Broadcasting of India, Anurag Thakur and the football icons in attendance handed over the first tickets for the competition handed to the community leaders and women who have contributed to society in different walks of life.

The Kick Off The Dream carnivals, a legacy initiative for the competition, aim to encourage children to break gender stereotypes by normalising inclusive participation through football-themed games and activities. During the carnival, 200 children were present and engaged in the various football-themed activities.

In addition, the Winner’s Trophy of the FIFA U-17 Women’s World Cup was also at display and participating children also got a chance to strike a pose with the silverware.

Speaking after the event, FIFA Legend Lindsay Tarpley said, “Playing at FIFA youth tournaments were a hugely important and memorable milestone in my career, as well as for many other stars from the USA and around the world.”

“The 2022 FIFA U-17 Women’s World Cup – India will be a hugely exciting opportunity for fans across India and around the world to not only to celebrate and be part of the exciting growth and momentum that women’s football is experiencing at the moment, but also to watch and support some of the brightest emerging stars of the women’s game.”

Sunil Chhetri, captain of the Indian Football Team, added, “Participating in a FIFA competition is a matter of immense pride. Hosting it is even more prestigious. Hence, I encourage all football fans to visit the stadiums and support the brightest young female footballers from across the world. These events come along very rarely and it is a chance for us as a nation to make our voices heard from the stands which will stand as a representation of football’s popularity in India to the watching world.”

Accessibility tickets are also available at all three stadiums in two categories:

Accessibility tickets can be requested over the phone +91-86570 19359 or via email (contact@india2022wwc.com) on a first-come, first-served basis and require proof of eligibility.

Visa, the Official Payment Services Partner of FIFA, is the preferred payment method for fan ticket purchases for the 2022 FIFA U-17 Women’s World Cup – India.

Check out the full match schedule for the FIFA U-17 Women’s World Cup 2022.