Gift Raikhan: NEROCA will stick to their catch them young philosophy!

Press Release 2021-01-03 I-League Comments Off on Gift Raikhan: NEROCA will stick to their catch them young philosophy! 250 Views 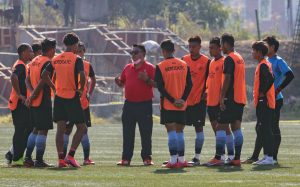 NEROCA FC head coach Gift Raikhan expressed that the Imphal-based outfit will continue to promote local young talents in the forthcoming I-League 2020-21 season that will commence on Saturday, January 9.

“We have always focused on identifying local young talents and grooming them. Our maximum players fall in the U-21 age-group,” Raikhan stated at the virtual press conference on Sunday, January 3.

“We have recruited only three foreigners this season – Nathaniel Garcia, his brother Judah Emmanuel Garcia and Varney Kallon. Kallon is a local favourite for his exploits for many a season with NEROCA,” he continued.

Nathaniel Garcia, who has switched camps from Gokulam Kerala to NEROCA ahead of the fourteenth edition of I-League, feels the team has shaped up well and they are excited to get on the field soon.

“It’s been a long time and we are quite excited to get on the field soon. I don’t want to put any pressure on Emmanuel but I know what he is capable of doing,” the Trinidad & Tobago-born midfielder stated.

Raikhan praised Garcia and said he is a ‘leader’ and someone who can “work hand-in-hand and motivate” the youngsters.

“Garcia is a natural leader. He is an outright professional and wants to take responsibilities. He is a character who works hand-in-hand with other players and motivates the youngsters. We trust his abilities,” he quipped.

Garcia also mentioned that it was an easy decision for him to ink the contract with the Imphal-based club.

“I have a long-standing relationship with Coach. After discussions, it was not a tough decision for me to come here. My role is a bit different here but I’m sure we can do well,” Garcia mentioned.

NEROCA FC begin their I-League 2020-21 campaign on January 15 as they face local rivals TRAU FC at the Kalyani Municipal Stadium.