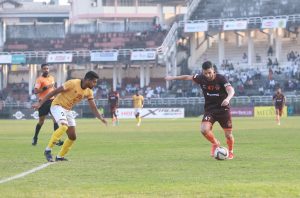 Gokulam Kerala FC could not have dreamt of a sweeter return to the EMS Corporation Stadium. They outplayed Real Kashmir FC in all departments on Friday, January 20, to win 2-0 and climb up to the third spot in the I-League with 21 points.

Head coach Francesc Bonet had said in the pre-match press conference that he is still hopeful of retaining the title. The way his team performed today and the bench strength the Spanish coach showed proves his hopes have a strong foundation. Gokulam Kerala made a slow start to the game but took over the midfield after the first 15 minutes, courtesy Hero of the Match Omar Ramos. Real Kashmir’s Ghanaian midfielder Wadudu Yakubu could not do much as Farshad Noor and Thahir Zaman kept the opposition wingers busy defending. Chances were hard to create.

Up front, Sreekuttan on the right and Sergio Mendigutxia in the middle combined so well that Real Kashmir coach Mehrajuddin Wadoo’s strategy of playing with lone striker Ibrahim Nurudeen and a high defensive line backfired. Sreekuttan could have scored himself in the 21st minute, had he not tried to pass the ball to Mendigutxia in the box and gone for glory. However, it was he who provided a perfect cross from the right to Thahir across the goal in the 35th minute. Real Kashmir goalkeeper Sanjiban Ghosh, who was indecisive right through the match, stayed on the line as Thahir neatly headed it on to the ground towards the far post. It bounced out of Ghosh’s reach and into the goal.

The match became progressively difficult for Real Kashmir thereon as there was more pressure on the defence and less chance to attack. The towering figure of Aminou Bouba at the back made the Malabarian’s defence impenetrable. Nurudeen was so well-marked by Bouba, Pawan Kumar, Subhankar Adhikari and Vikas Saini, that he hardly found space to turn or take a shot at goal. On the other end, Bouba almost scored the second goal in stoppage time of the first half. His header off a free-kick hit the post. It would not have mattered though because he was ruled offside.

Wadoo made four changes at the start of the second half but they did not make much of a difference. On the other hand, Bonet’s replacements did wonders. Noufal in place of Sreekuttan and Jobby Justin in place of Zaman, played havoc with the Real Kashmir defence. Davinder Singh had a particularly torrid time containing them. Both Noufal and Justin came close to scoring and it finally happened in the 86th minute. Noufal cut in from the right with great speed and unleashed a right-footer. Ghosh had it covered at the first post but spilled it, which resulted in a corner. Ramos curled in a beautiful left-footer and Jobby literally flew to head the ball in and make it 2-0.

Mendigutxia’s replacement and Gokulam Kerala’s new Kyrgyz signing Eldar Moldozhunusov also got a couple of chances in the dying minutes but could not find the net.