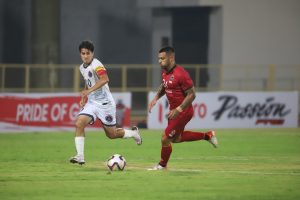 Rajasthan United FC picked up all three points in their I-League 2022-23 season opener against Churchill Brothers registering a 2-1 win at the GMC Bambolim Stadium on Tuesday, November 15.

Substitute Britto PM’s second-half strike proved to be the decisive goal of the game, after Melroy Assisi’s headed goal was cancelled out by Churchill’s Abdoulaye Sane at the end of the first half. Rajasthan United defender Hardik Bhatt was sent off towards the end of the match after a second bookable offense.

@Arunfoot
Previous The 2022/23 I-League Round 1 in Numbers!
Next vivo connects passionate Football Fans with GIVE IT A SHOT campaign at 2022 FIFA World Cup!