India U-17 squad named for SAFF U-17 Championship! 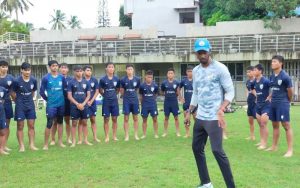 India U-17 head coach Bibiano Fernandes named a 23-member squad for the SAFF U-17 Championship which kicks-off in Colombo on September 5, 2022.

“The boys have worked so hard over the months. They are excited. They are hitting the ground with high levels of intensity and motivation,” said Bibiano.

India begin their campaign against Bhutan on September 5. The final is slated for September 16.

“We believe this batch has what it takes to outdo what the previous two batches achieved. Our short-term aim is to win the SAFF U17 Championship and qualify for the AFC U17 Championships as group leaders,” the coach stated.

The fixture for India’s matches are as follows:

Tags India U-17 SAFF U-17 Championship