India Youth Coach Nicolai Adam: It will be like a tiny little Mini World Cup!

Arunava Chaudhuri 2016-05-10 Team India Comments Off on India Youth Coach Nicolai Adam: It will be like a tiny little Mini World Cup! 2,110 Views 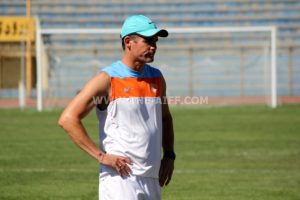 With less than a week left for the kick-off of the inaugural edition of the AIFF Youth Cup, Head Coach of the Indian Under-16 National Team Nicolai Adam feels the competition in the five-Nation Tournament would be “intense”.

“The competition would be intense,” Adam told AIFF Media, referring to the participation of USA, South Korea (Korea Republic), Tanzania and Malaysia in the Tournament.

“As a Team we sat together and set up our goals. We would like to play five matches in the Tournament. If we finish among the top four Teams, we get to play an additional match (the third-place play-off). In other words, we can’t afford to finish last,” he states.

You look at the schedule to understand better what he means.

“We have a Team from North America and they have been regular entrants to the U-17 World Cup,” Adam mentions with reference to USA.

“Then we have two Asian Countries besides us. It’s no secret that Korea Republic are a powerhouse in Asia and have qualified for the U-16 AFC Finals (which are to be hosted in Goa in September 2016) and so have Malaysia. So they will come prepared,” Adam adds.

“We also have an African Team playing in the format,” Adam says. “We do not know much about Tanzania but we came back from South Africa (from an exposure Tour) and understand that Teams from the region are normally very strong.”

“What better tests can you get than this?” Adam, who has now been in charge of the 2017 U-17 World Cup Team for a year, quips. “I expect youth Football at the highest level to be played in the competition.”

The Tournament kicks-off on May 15 and two matches have been scheduled for the day. While Tanzania play USA in the opener, India U-16 will be playing Malaysia U-16 in the second match of the day. All matches would be played at Tilak Maidan, Vasco, Goa.

The Tournament is part of the exposure being provided by All India Football Federation to the India U-16 National Team as they prepare for the 2017 U-17 FIFA World Cup.