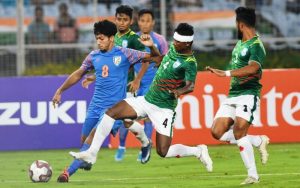 The 2022 FIFA World Cup/2023 AFC Asian Cup qualification round 2 matches which were scheduled to be played in March and June 2020 have been postponed till further confirmation.

In a letter the AFC wrote, “FIFA and AFC will discuss further details of the postponed matches and communicate to the PMAs in due course.”

India were slated to host Asian champions Qatar at the Kalinga Stadium in Bhubaneswar on March 26. In addition, in June the Blue Tigers were scheduled to play two matches – against Bangladesh in Dhaka on June 4, and then hosting neighbours Afghanistan in Kolkata on June 9.

Meanwhile the continental apex body further mentioned that upon mutual agreement, the respective countries can decide to play as per the pre-decided schedule should the safety and health concerns are taken care of.

“PMAs may still play the matches in March and June 2020 upon mutual agreement, provided the safety and health concerns of all individuals involved met the required standards, subject to prior approval by FIFA and AFC,” the letter further mentioned.

“AFC and FIFA will continue to assess the situation and decide whether further changes to the schedule of the Preliminary Joint Qualifiers Round 2 are required with the aim of protecting the well-being and health of all individuals concerned.”