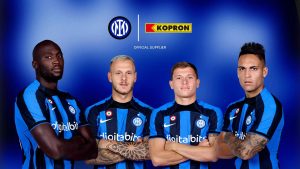 FC Internazionale Milano and Kopron, a leading Italian brand in the corporate logistics sector, have announced that they have signed a new partnership deal for the next two seasons.

This is, therefore, the consolidation of a productive two-year period, in which new projects have been undertaken as a signal of the partnership’s commitment to innovation and excellence. After two years alongside the Inter family and a bond strengthened by a collaboration to update the Club’s facilities, Kopron is now returning as the Official Supplier of FC Internazionale Milano.

Thanks to this new deal, the brand will be visible at the Stadio San Siro and the Suning Training Centre, as well as on the Club’s official website. Furthermore, Kopron will take part in a raft of marketing and communications projects alongside Inter.

“It’s an honour to return as a partner of FC Internazionale Milano and it’s a great opportunity to give visibility and prestige to our group. We’re continuing, therefore, to collaborate with one of the biggest Clubs in football, also in a business sense as we will provide support to Inter in terms of logistics and the creation of state-of-the-art sporting facilities,” said Mario e Paolo Vergani of Titolari di Kopron.