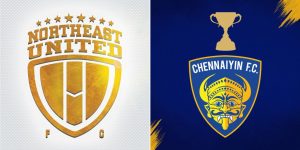 The match made a slow start but then the champions Chennaiyin FC looked better away and they were denied on numerous occasions by a strong performance from India goalkeeper Subrata Pal for NorthEast United FC. It was goalless at the break.

Things changed in the 49th minute as a perfect cross from young Siam Hanghal was lovely volleyed home by Italian striker Davide Succi with Subrata Pal getting a hand to it, but the shot so strong that it went in for Chennaiyin FC’s 1-0 lead.

Now NorthEast United FC had to come out of their shell as they seemed subdued until this time all evening. Now Katsumi Yusa took charge and created changes for the Highlanders. The first was a Katsumi cross across the face of the goal, but at the other end young Jerry Lalrinzuala cleared ahead of local boy Holicharan Narzary.

NorthEast United FC now put pressure on Chennaiyin FC mainly through corners or through their top striker Emiliano Alfaro, but the champions defence held or keeper Karanjit Singh was in the way to score a memorable first ever away win at NorthEast United FC.