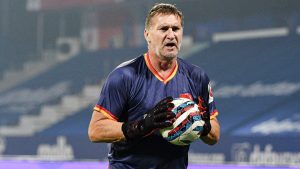 Jamshedpur FC confirm the signing of Leslie Cleevely as Goalkeeping Coach of the club for the remainder of the 2021/22 season.

On joining Jamshedpur FC, Leslie said, “I’m grateful to be joining such a prestigious club with staff of the quality of Owen Coyle and Sandy Stewart, especially at a time when the team are doing so well. I can’t wait to get to work with the keepers and help to build upon the great start you have had to the season.”

WHAT A BEAUTIFUL BLAST FROM THE PAST! 😍👀

Our new Goalkeeping Coach back in the day with some of the most legendary goalkeepers in the history of football. 🧤⚽