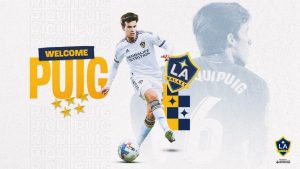 The LA Galaxy have announced that the club has acquired Spanish midfielder Riqui Puig using Targeted Allocation Money (TAM) via transfer from LaLiga side FC Barcelona. Puig will be signed to a three-and-a-half-year contract through the end of the 2025 MLS regular season pending receipt of his International Transfer Certificate (ITC) and P1 Visa.

“We are pleased to welcome Riqui to the LA Galaxy,” said LA Galaxy Head Coach Greg Vanney. “Riqui is a very technical and well-educated player with incredible experiences for his age. He will fit seamlessly into our group and style of play.”

Puig, 22, tallied two goals and three assists in 57 appearances (15 starts) across all competitions with FC Barcelona (2018-22). Puig notched one goal in 15 games played (2 starts) for Barcelona during the 2021-22 LaLiga campaign.

“Riqui is a very talented player with a unique profile that brings something different to our squad,” said LA Galaxy Technical Director Jovan Kirovski.

In his debut for Barcelona, the Matadepera, Spain, native tallied an assist off the bench in a 4-1 win over Cultural Leonesa in the Round of 32 of the Copa del Rey on Dec. 5, 2018. Before making his debut for the first team, Puig tallied two goals and 10 assists in 56 appearances for Barcelona B. During his time at FC Barcelona, Puig won the 2018-19 LaLiga title and the 2020-21 Copa del Rey. Additionally, Puig helped Barcelona claim the 2017-18 UEFA Youth League title, with the midfielder tallying three goals and three assists in 10 games played (10 starts) in the competition.