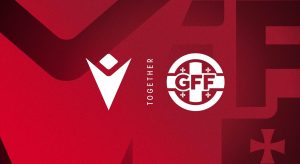 The portfolio of Macron ‘branded’ international football federations has been further enriched by the entry of the Georgian Football Federation. The technical partnership agreement between The Hero company, a leading international brand in the teamwear sector, and the Georgian Football Federation, foresees the supply of technical clothing and match kits for the National A team, National Futsal team, youth teams and the women’s national team for the next six years.

The Georgian Football Federation (GFF was founded on 15th February 1990, becoming affiliated to UEFA and FIFA in 1992. The GFF is based in Tbilisi and manages Georgian football, from its top club league, the Erovnuli Liga, to the men’s and women’s national teams. The men’s national team ended 2021 with a series of positive and encouraging results, such as a clear 2-0 victory over Sweden in the 2022 World Cup qualifying match.

The Macron Hero will make its debut on the shirts of the national teams later this month, on the occasion of the UEFA Futsal Championship scheduled in the Netherlands, an important debut also for the Georgian Futsal team with their first ever qualification for this tournament.

A Federation and a National team that want to grow with a project that finds in Macron the ideal partner: passion, team spirit, a strong sense of belonging to a group and a community are just some of the values shared with the Italian brand. Macron will provide the GFF with high-quality products produced with their notoriously careful attention to environmental sustainability. The exclusively designed match kits will enhance the history, symbols and colours of the Georgian national team.