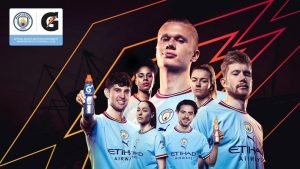 Manchester City has renewed its partnership with sports drink and nutrition brand Gatorade.

The new deal, which runs until 2025, will see the world’s number one sports drink brand continue as the Official Sports Nutrition Partner of both the men’s and women’s teams.

City’s partnership with Gatorade began in 2017 and extended to include the women’s team in 2019.

Since then, Gatorade has provided the Club with access to its elite portfolio of sports fuel products, equipment and cutting-edge science through the Gatorade Sports Science Institute (GSSI), allowing the teams to perform at the highest level in training and on matchdays.

In addition to matchday presence within the Etihad Stadium and Academy Stadium for all men’s and women’s first team matches, City and Gatorade have worked together to create a range of high-performing, informative video content for fans across the world.

The renewed sponsorship will see the brand continue to integrate with the Club through state-of-the-art GSSI innovation projects in the field of sports hydration and sweat, as well as provide opportunities to support Gatorade’s grassroots 5v5 Tournament.

“We’re delighted to continue our partnership with Gatorade which has continued to strengthen and expand over the last five years,” said Sam Erith, Head of Sports Science (First Team) at Manchester City.

“The club has collaborated with Gatorade across a number of key areas for both our men’s and women’s teams to help fuel our athletes in training and on matchdays.

“The knowledge Gatorade has around athlete performance is unparalleled and has been beneficial to the club as we continue to strive for success on the pitch and we look forward to continuing to collaborate in the future.”

Mark Kirkham, SVP and Chief Marketing Officer at PepsiCo, added: “Over the past five years we’ve built a strong relationship with Man City, working closely with the club to help power players through nutrition, training and match days.

“From providing access to our world-leading GSSI experts and decades of sports science research, to bespoke athlete testing and fuelling programmes, Gatorade has been helping support the club and its athletes combat the physical demands of the sport in order to achieve greatness.

“We look forward to our on-going work with Man City.”