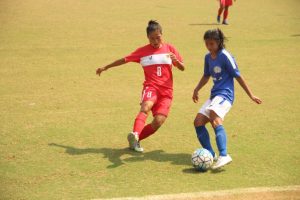 Manipur edged out a spirited Railways side 2-1 in the second semifinal of the 23rd Senior Women’s National Football Championship at the Barabati Stadium in Cuttack earlier on Monday.

Star striker Bala Devi opened the scoring for Manipur before Kamala Devi equalised for the Railways, with Bala heading in a late winner to push her side into the final.

Both the teams came all out right from the beginning with the teams exchanging quick passes and timely interceptions in an exciting display of football. Manipur struck first blood when Railways keeper Samal failed to latch onto Bala’s powerful shot. The score read 1-0 to Manipur in the 13th minute.

But even before the celebrations could die down on the Manipur bench, the Railways, struck back. Kamala Devi making an exceptional run into the box to score the equaliser only a minute later in the 14th minute. The quick goals led to the tightening of the defences as the teams headed 1-1 into the break.

The cat and mouse chase continued in the second half as both teams looked for that decisive through ball or the perfect cross inside the box. But a disciplined display at the back from the sides blunted out each other’s attacking intentions.

Prameshwori came close but her shot went over the bar while Kamala’s shot was well judged by Panthoi at the other end as the teams matched other at every turn.

Just as it seemed that the game was headed towards extra-time, the Railways resistance was broken when Bala Devi poked it in from a goal mouth melee in the 85th minute mark. Her goal turning out to be the winner and eventual difference between the two sides.

Manipur will face Tamil Nadu in the final on Wednesday, February 14.