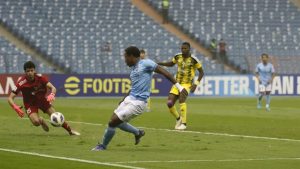 Tempers flared within the first few minutes of the game, as it was only the 3rd minute when Vikram Partap was shown the first yellow card of the night. His sliding challenge on Roderick Miller was reckless, and was booked for the same.

Goalmouth action began soon after, when Air Force were almost the first side to score. Jabbar found Shareef inside the box, who tried to drive in a low cross. His effort was deflected by Mehtab’s sliding block and ended up finding its way into the net. However, the goal was overruled for offside, as Shareef was positioned a few yards behind the defensive line.

The Islanders reacted in rapid succession, coming close to scoring only a couple minutes later. It was a quick counter attack that started off from Phurba, and made its way up the pitch in a matter of mere seconds. Some interplay between Chhangte and Bipin saw the #29 burst down the wing, and square it to Vikram at the edge of the box. Vikram poked the ball ahead to Chhangte, who tried to pull a shot off on the turn. His effort was well-placed and forced the goalkeeper into a vital save.

Phurba continued his fine form, saving a dangerous Air Force shot in the 24th minute. The Falcons showed their prowess from set-pieces yet again. It was Wilson Akakpo who had ghosted in behind the defence, and got a header at the far post. The ball was struck from close range and with power, but the custodian reacted well to push it over the bar.

The first substitution of the game also came early. Vikram Partap was subbed off for Brad Inman in the 24th minute.

Around the first quarter of the game, Mumbai City came close to scoring yet again. Bheke’s diagonal ball from the right was dummied by Chhangte, and was played into Bipin who had made a run into the centre of the box. The winger found himself in a good position, but failed to get the shot off in time.

It didn’t take too long for the Islanders to score, as they found the net within the next five minutes. A quick counter was executed in the 30th minute, which saw Brad Inman release Chhangte down the right with a sumptuous through ball. Chhangte’s cross was deflected, and he played his follow through to Inman, who was then at the edge of the box. Inman pulled the trigger and forced the ‘keeper into parrying the ball away. Fortunately, Diego Mauricio was alert enough to latch on to the loose ball and tap it into the net.

The first half ended in quite a heated fashion, owing to some refereeing controversy. Mourtada Fall was adjudged to have fouled an Air Force player at the edge of the box, and the referee blew the whistle. However, in the subsequent moments, the ball was floated into the box and was headed into the Mumbai City goal. Initially, the referee awarded the goal despite the whistle having been blown. However, after heavy opposition from the Islanders, the referee rescinded the decision and gave the free-kick – much to the dismay of Air Force Club. Mourtada Fall was then shown a yellow for his challenge.

Much like the first half, the second half started with a booking as well. Safaa booked for a bad challenge on Apuia in the 51st minute.

The Iraqi side was desperate to pull one back. They attacked in waves, bombing down the wings and putting in a variety of crosses. The first instance of this came in the 58th minute. Shareef burst into the box and outpaced his man. He then cut it back for Hammadi Ahmed, who had been substituted only a few minutes ago. However, his delivery was just a little too far behind for a finish to be applied.

Once again, the Falcons used the left wing to breach through the Mumbai defence. Just at the hour mark, Dhurgham and Miller combined down the left. Miller steamed into the box and went down. Hammadi got to the loose ball and played it back to Shareef who took the shot instantly. His effort though, did not reach Phurba as it was blocked by Mehtab.

The following 20 minutes were a show of how resilient Mumbai City was in defense. Irrespective of all the probing and stretching, the players dealt with all threats that were put up.

Within these twenty minutes, two changes were made by Des Buckingham. Vinit Rai and Mohammad Rakip were brought on for Diego Mauricio and Bipin Singh. Roderick Miller was also booked for a bad challenge during this timeframe.

It wasn’t until the 86th minute till Air Force Club got another sniff at the goal. It was yet another corner that gave them some hope, except this time it was Miller at the end of it. Dhurgham Ismail swung the ball in, and Miller got a free header from the middle of the box. However, his attempt was too close to Phurba to be threatening.

Phurba was called into action once again, in the 89th minute. Abdulameer picked up the ball on the left and cut inside swiftly. He got a good shot off, which evaded all the sliding bodies and made its way to the goalframe. However, the goalie was well aware, and dealt with the shot.

Although the final 45 wasn’t nearly as dynamic as the first half, it did end with some last minute drama. Deep into stoppage time, Abdulameer weaved his way through the defense and , played it to Boukassi. He curled a shot in from the half-space, which beat Phurba and was on its way in. Fortunately for Mumbai City, Mehtab blocked it on the line with his chest and cleared it away.

With this victory, the Islanders recorded a second place finish in Group B of the AFC Champions League, finishing with seven points. The result concludes the 2021-22 season for Mumbai City FC.