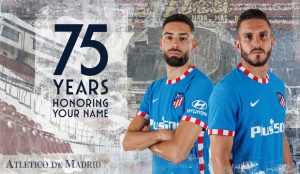 This season Atlético Madrid are celebrating the 75th anniversary of their current name – Club Atlético de Madrid. They want to pay tribute to such an important moment in the club’s history through the four Nike-made kits they will wear the upcoming season. These are inspired by some unforgettable moments the Atlético fans have enjoyed during these 75 years.

Many of these historic moments took place at the Vicente Calderón Stadium – the clubs home for over 50 years. It was inaugurated on October 2, 1966 in a game against CF Valencia, during which Luis Aragonés scored the first goal of the stadium’s history. The last match was played on May 21, 2017. Atleti beat Athletic Club 3-1 as Fernando Torres netted a brace and Ángel Correa scored a goal. During those 51 years, the club won 19 titles and enjoyed countless magical nights.

With a round neck, the jersey pays tribute to their former home through the colours of its seats: blue, red and white. The kit is constructed with 100% recycled polyester fabric, which is made from recycled plastic bottles. This helps deliver peak performance with a lower impact on the environment. 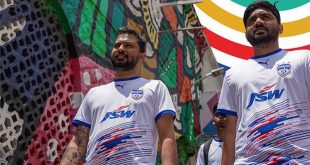