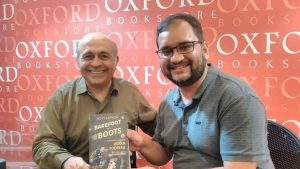 I first heard on Thursday, November 18 from a friend that Novy Kapadia is no more while after another friend had asked me on Twitter if Novy was no more.

I honestly didn’t pay too much attention to it as I didn’t think that Novy would be no more but then I started seeing on social media the messages that Novy Kapadia is no more.

I felt really bad and sad then since I had started IndianFootball.Com in April 1998, Novy Kapadia was always there to support me and all of us youngsters as a team, and inform and educate us about the history of Indian football.

I remember that Jaydeep Basu, who might have forgotten by now, in late summer 1999 showed me a copy of the annual Durand Cup book, which Novy used to write and collect data for. Through another journalist friend I got hold of a copy and asked Novy, if we could reproduce the data on our IndianFootball.Com website for people from around the world to be able to see in statistics the history of Indian football. He directly agreed and the year book became the backbone of the database that we at IndianFootball.Com created and put together with the help of Novy and many other people.

Novy was fascinated what the Internet as a platform offered and agreed not only to provide us with data which he had but also wrote columns and stories on the history of Indian football for us.

In 2007, I was involved in organising the Durand Cup and with Novy was asked to do the commentary of the semifinals and final for NDTV. By then I had done television and radio work in Germany and India, but working with Novy was not only a big big honour but somewhat also involved pre-match pressure as he knew so much on Indian football, the teams, the footballers, the coaches, the club officials, even the referees. But Novy being Novy, made me feel at ease, asked me to even lead the commentary as he said, you bring an international flair to Indian football, you do it and I will be your partner on air. A big compliment for a young Arunava. Thank you Novy for that again!!!

Watch a clip from the 2007 Durand Cup final featuring Novy & myself (excuse the video quality)!

I also do remember talking Indian football with Novy Kapadia and the late Noel da Lima Leitao. While Novy was soft spoken, Noel could get louder to get his point across, it was great fun to experience these conversations on Indian football. I also do remember the duo being the commentators of the inaugural National Football League in 1996/97. Those hours would fly by like minutes and one would always learn about the history and background of Indian football. That to me is the biggest loss with Novy no more as all these anecdotes, stories and Infos are gone with the man.

I remember a chat we had around the launch of the Indian Super League, where I had joined Mumbai City FC as its COO. Novy was sceptical about the ISL and its potential impact on Indian football, but being a friend, he wished me all the best for my work.

Then there was October 2017 around the 2017 FIFA U-17 World Cup in Kolkata. I by-chance got the info that Novy would be coming to the City of Joy to launch his book ‘Barefoot to Boots’ in the city at the Oxford Bookstore on Park Street. I got myself a copy and we had a lovely chat on football with fans and other journalists about Indian football.

But there was more to Novy Kapadia than just football though football was his first love.

When I was in Delhi and after games at the Ambedkar Stadium, Novy would always have the perfect advise on where to eat dinner. It was Novy, who took me and others for the first time to Kareem’s and there the football conversations would go on and on with great food.

In recent years, Novy had not been keeping well and since the pandemic started, I sadly have to say, I didn’t keep in touch like in the past when I used to travel regularly to Delhi.

Dear Novy, Indian football will miss you my friend. May you watch over us and one day, we in Indian football achieve the great heights that we used to speak and dream about…