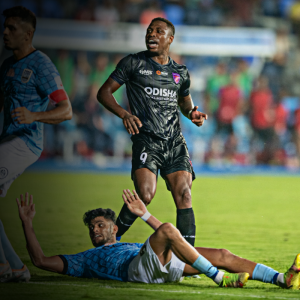 Odisha FC go up against Mumbai City FC at home at the Kalinga Stadium as the first match of ISL-9 in 2023.

Josep Gombau’s men are back to home base as they narrowly went down against Kerala Blasters FC in Kochi by very fine margins. With Mumbai City FC visiting the fortress the Juggernauts will look to start the new year with a positive result.

The Islanders completed their second turnaround against Chennaiyin FC at home. Chennaiyin FC took the lead in the 34th minute through Sliskovic but Chennaiyin FC’s happiness was shortlived as Mumbai City FC equalized four minutes later. Greg Stewart handed Mumbai City the lead and the winner in the 57th minute.

Bipin Singh and Lallianzuala Chhangte are the players to look out for as both the Islanders have been in good goalscoring form while Greg Stewart and Ahmed Jahouh possess a lot of threat through the middle as well.

Josep Gombau’s side will be hungry to end their goal-scoring draught when they take on the Islanders on Monday. After a dominating performance against ATK Mohun Bagan and narrowly going down against the Kerala Blasters the Juggernauts will be highly motivated to bag all three points against Mumbai City FC.

“The mentality and atmosphere is really positive inside the team. Each and every player wants to win. We want to give the fans a positive result and start the new year on a good note,” said Diego Mauricio at the pre-match press conference.

The game will be telecasted live on Star Sports and livestreamed on Disney+ Hotstar and JioTV from 7.30pm.