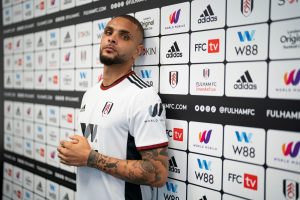 Fulham FC have announce the signing of Layvin Kurzawa on a season-long loan deal from Paris Saint-Germain.

The left-back said, “I feel very, very happy to be here. It’s a family here, everyone is very cool.”

“I’ve watched every Fulham game this season, and I can’t wait to play with this team.”

Tony Khan added, “I’m thrilled that we’ve been able to add Layvin Kurzawa to our squad!”

“As we work to build on our good start to this season, adding a player of his talent and his experience against top competition will complement our team well.”

“Layvin is excited to be part of Marco’s squad and to play for Fulham! Come on Fulham!”

An attacking, pacey full-back, Kurzawa came through the ranks at AS Monaco and made his senior debut shortly after his 18th birthday in September 2010.

Two years later he helped Monaco to the Ligue 2 title, but it was in 2013/14 when he truly announced himself with a phenomenal campaign at left-back.

In just 28 appearances, he found the net five times and assisted a further three as Monaco – in their first season back in the top-flight – finished second behind PSG, earning himself a spot in the Ligue 1 team of the year.

That second place finish brought with it Champions League qualification, a competition Kurzawa played in eight times the following season as Monaco reached the Quarter Finals – knocking out Arsenal en route – where they were narrowly defeated by Juventus.

Having also helped his side to a third place domestic finish, champions PSG brought Kurzawa to the French capital that summer for a reported €25m. He departed Monaco having registered 17 goal involvements in 95 outings.

Registering an impressive 14 goals and 23 assists for the club, Kurzawa’s perhaps most famous moment came in a Group Stage win over Anderlecht, when he scored three times in 27 minutes to become the first defender ever to net a Champions League hat-trick.

Kurzawa made his senior debut for France in 2014, and has now represented them 13 times, scoring once.