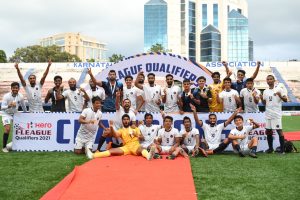 Rajasthan United have been crowned champions of the I-League Qualifiers 2021 here at the Bangalore Football Stadium, as they held on to a hard-fought 0-0 draw against Kenkre FC. The side from Rajasthan needed a solitary point from the final match to secure the elusive I-League berth owing to their two-point lead over Kenkre FC going into the final matchday. This result has made Rajasthan United the first-ever team from their state to play in the I-League.

The match began with a slow tempo as both teams applied a measured approach to grow into the game gradually. As neither team was too expansive in pursuit of a goal, chances were few and far between in the first half. As the match progressed, it seemed like both sides were waiting patiently for the other to blink first and make a mistake.

Rajasthan United were nearly punished for their first lapse in concentration in the 28th minute when Gurmukh Singh stepped out of the last line of defence to intercept a pass from Kenkre FC captain Al Azhar. Gurmukh could not bring the ball under his control as it rolled through to midfielder Pravitto Raju, who had a glorious opportunity to bear down on goal. Instead, Pravitto spotted Rajasthan United FC goalkeeper Vishal Joon off his line and tried to lob him but failed. His effort went tamely into the hands of Vishal Joon.

Two minutes later, in the 30th minute, Rajasthan United FC winger Aman Thapa came into life near the opposition box but was promptly brought down near the edge of the box. Aman Thapa stood over the resulting free-kick and produced a fantastic effort over the wall. However, goalkeeper Tenzin Samdup’s world-class save denied Rajasthan United FC the lead.

Rajasthan United had one more half-chance towards the end of the first half. Dilliram Sanyasi played Sukhjit Singh through on goal, but the striker could not latch onto the ball. Going into half time, there was nothing to separate the two sides. Both sides were implementing their tactics perfectly, with Kenkre FC playing their possession-based game and Rajasthan United trying to score a goal on the counter.

Kenkre FC came into the second half with renewed vigour as it was a case of now or never for the team from Mumbai, who had to take the game to their opponents and force a win in their favour to qualify for the I-League. It was indeed the side from Maharashtra who had the better chances to go ahead in the second half.

In the 60th minute, Kenkre FC striker Ranjeet Singh was played through on goal with a lofted ball over the top of the Rajasthan United FC backline. With ample time to bring the ball down and space to run into, Ranjeet made the inexplicable choice of attempting to lob goalkeeper Vishal Joon from outside the box, much like the intentions of his teammate Pravitto Raju earlier. Ranjeet could not execute his finish to his liking as the ball sailed over the bar, leaving Kenkre FC head coach Akhil Kothari visibly frustrated.

In the 63rd minute, Rajasthan United came close to scoring through winger Aman Thapa, who managed to get behind last man Zacharie Mbenda. Thapa got the better of Mbenda for pace but could not wriggle his way past the defender as Mbenda outmuscled his man to recover. Rajasthan United made claims for a penalty to be awarded for the challenge, but the appeals were promptly waved away by the referee.

With the deadlock unbroken after the 80th-minute mark, Kenkre FC threw the kitchen sink at their opponents. They had the best chance of the game through influential substitute Lester Fernandez in the 84th minute, as he played a quick one-two with striker Yash Mhatre to be released through on goal with a smart lobbed pass. Time nearly stood still as Lester bared down on goal. However, he could not apply the finish from the one-on-one situation as goalkeeper Vishal Joon made the save at his near post.

Kenkre FC had another golden opportunity in the 90th minute that could have changed the outcome of these I-League Qualifiers in the dying moments of the competition. Yash Mhatre left his marker Floyd John in his wake with a quick turn, but with only the goalkeeper to beat, the striker could not keep his left-footed shot on target from close range. As this chance went begging, the game agonisingly slipped through Kenkre FC’s hands as Rajasthan United withstood the attacking onslaught to hold on to the precious draw that sends them through to the I-League.