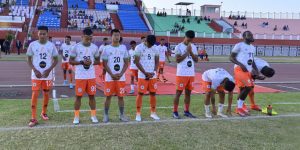 After the emphatic win in the Imphal Derby at the Khuman Lampak Stadium, NEROCA will now host the 2016-17 Champions Aizawl FC for their I-League 2022-23 encounter at the same venue on Saturday, January 21, 2023. The kick off is at 4:30pm IST.

The victory against city rivals TRAU on Wednesday came as a huge relief for NEROCA as it ended their seven-week winless streak. The three points on the table also brought a breath of fresh air in the club’s atmosphere as it allowed the Orange Brigade to move out of the relegation zone, for the time being at least.

At the pre match press conference, NEROCA FC head coach Wangkhem Khogen Singh talked about the previous game and predicted a fierce encounter tomorrow. “Last game we won the match in the most competitive manner. All the teams are very good in the league, Aizawl FC are a big team and it will be yet another competitive match.”

Khogen Singh believes the home fans will play a major role and may help the team in securing a positive result tomorrow. “We will have the support of the home fans and we want to score three points tomorrow,” Khogen Singh said.

Michael Kporvi, NEROCA’s new Ghanaian recruit, came off the bench in the previous match to make a big impact. While his assist was instrumental behind the goal scored by Jourdaine Fletcher, he himself struck in the final minutes to help his team come up with an impressive show. Kporvi, however, believes that it was the team effort always needed to put up a winning performance. “In a victorious show, it’s all about the team and the players. Without them it can’t be possible,” he said.

Aizawl FC, so far, have earned only six points in their six away outings. However, the People’s Club are not exactly a pushover and have proved themselves as difficult customers against strong rivals – the 3-3 draw against league leaders Sreenidi Deccan and a 2-2 draw against Mohammedan Sporting Club are clear examples of their abilities.

Aizawl FC dominated the previous encounter against NEROCA as their Japanese defender Akito Saito thumped in a decisive header at the hour mark. However, NEROCA, having the home advantage, can be expected to start as favourites but Aizawl FC with a decent record on the road have every chance to match the Orange Brigade evenly tomorrow.

Aizawl FC head coach Caetano Pinho praised the opponents’ coach and talked about the atmosphere in the dressing room. “Tomorrow’s match will be a tough one for us. They have got a very good coach who has an I-League title to his credit. No team are easy in the league, but our boys are showing great character in the training. We are expecting to get the three points,” Pinho said.

The match between NEROCA and Aizawl FC will be broadcast live on Eurosport and Doordarshan Sports and streamed live on the Discovery Plus OTT platform.