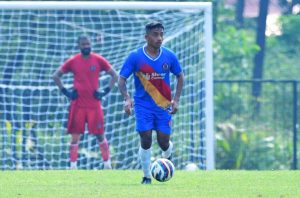 A clinical SC East Bengal rode on goals from Amir Dervisevic and Sourav Das to secure a 2-0 win over former I-League champions Salgaocar FC in a pre-season friendly at the Don Bosco Ground in Goa on Saturday.

Central midfielders Dervisevic and Sourav Das scored in each half to ensure the red and gold brigade maintain the winning momentum after their 3-1 victory over Vasco SC on Friday, the first pre-season friendly played by Manolo Diaz’s side.

Slovenian Dervisevic scored from the penalty spot as early as in the sixth minute with Sourav Das adding to the tally in the 65th minute, moments after coming on.

Diaz played Arindam Bhattacharya in goal after Sankar Roy and Suvam Sen got minutes under the bar on Friday.

Hira Mondal was given another go after his industrious display against Vasco SC along with Australian Tomislav Mrcela and Joyner Lourenco, both keeping their places from the first friendly.

Asheer Akhtar played at right-back in a fluid 4-2-3-1 system that saw Wahengbam Angousana and Dervisevic play in front of the backline with Mohammed Rafique deployed in a central attacking midfield role.

Bikash Jairu and Jackichand Singh hugged the flanks with Antonio Perosevic playing as the lone striker.

Perosevic was in the thick of things from the word go. The Croatian striker was tripped inside the box in the fifth minute, Dervisevic then converting from the spot with ease.

SC East Bengal were all over Salgaocar from the off.

Mrcela skewed wide from a Mondal cross after Jairu set the overlapping left-back up with a perfectly measured ball.

Mrcela got another chance to score from a Dervisevic corner but the centre-back glanced wide as the home team bossed the game.

Jackichand then whipped a cross for Antonio, who fluffed his lines.

Mrcela also found the bar in his way just before halftime from another delectable Dervisevic corner.

The second half saw the introduction of Naorem Mahesh, in place of Jackichand, and the pacy forward swung into action moments after coming on.

The 22-year old Naorem teed up Dervisevic only for the former Maribor playmaker to slice the ball just over the bar.

Two minutes after the hour mark, Amir made way for Das and the midfielder made an immediate impact. Darting past a few defenders, Das showed grit by winning the ball back after losing possession to score a brilliant solo goal.

Arindam was hardly troubled as the backline kept things tight with Mrcela leading the defence.

Diaz’s team dominated possession in the final few minutes and kept a clean sheet to cap off a good outing.