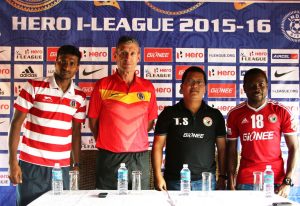 It’s a do or die situation for Lajong, the I-League club from Meghalaya North East India. This Sunday, Lajong will host the Kolkata giants, East Bengal, in what will be the ultimate contest of the I-League season for the youngest squad in the I-League 2015-16 season. The match will kick off at 7pm at the JN Stadium Shillong tomorrow night.

The team earned one victory at home with one draw and were in top four with 15 points in the I-League table, before the team travelled to Goa and Mumbai where things didn’t go down too well. The team suffered two losses with a scoreline of 5-2 and 2-1.

Due to their lack of confidence in front of goal the team now sees themselves lying in the danger zone along with Mumbai FC, Salgaocar FC and Aizawl FC, facing relegation threats. Hence the match on Sunday is a must win game for Lajong.

With a squad dominated by the youngsters and a few experienced players, the Lajong Gaffer believes that the team has done well this season but were unlucky on many occasions. The other problem that Lajong faced was the lack of goals coming from the players and Singto had said time and again that it is imperative to find the goals because they help the team to win matches. Thirdly, injuries have also been another major cause that pulled Lajong from maintaining consistency when they had the chance to do so. They have played most of their games with either just one or two foreigners.

Japanese defender Yusuke Yamagata and Captain Aibor Khongjee who was injured during national duty was ruled out for the rest of the season and missed many key matches. Hence the team continued to rely on their academy boys to play in the defense position namely, Samuel Shadap, Nim Dorjee Tamang, Chinglensana Singh and Pritam Kumar.

The team has delivered some good performances at their home fortress and lost only one home game so far. Speaking on the team’s home display this season, Coach Thangboi Singto said, “At home we have done well and lost only once. We need to maintain home advantage and give a strong performance.”

“We will be playing the most important game of the season. We need to keep clean sheet as we have players who can and have been scoring.

We need to stay compact and strong at the back. I am expecting the forwards to strike and give us goals.

It will be a tough game and we need to believe in our team abilities. But we cannot lose on Sunday. We need to win the match”, concluded Singto.

The away team from Kolkata, the mighty East Bengal who have many experienced and star players in the team are placed in third position with 25 points. They have recently appointed and brought back Coach Trevor Morgan to the team and will try to up their last I-League game performance in their hopes to secure the second spot which is currently being taken by their rivals, Mohun Bagan with 27 points, who also have a game against the recently crowned champions, BFC.

They are coming into this last fixture of the I-League after playing a goalless draw with Sporting at home. The team has won as many as 7 matches with four draws and four loses.

The Kolkata outfit has scored a total of 22 goals, with Ranti Martins alone scoring 12 goals and is also the current highest goal scorer in the league. He ended the previous season also as the top scorer in the League. Other players who have greatly contributed to the team with the goals are Dong-Hyun, Bernard Mendy, Mohammed Rafique, Bello Rasaq and Bikash Jairu.

Coach Trevor Morgan who was also present at the pre-match press conference said, “Both the teams need to win the match for different reasons.”

“Top two teams will play tonight and if Mohun Bagan lose then we have the chance to be in top two. So we need to win on Sunday. It is also an important match for us.”

The Lajong Management also urged the fans of the club to throng to the JN Stadium Shillong on Sunday and be the 12th man for the team and give full support so that the spirit and confidence of the Lajong players will also be high during game of play. The crowd support will truly be beneficial in helping the team get a good result on Sunday’s game and bring back I-League to the JN Stadium in January 2017 next year and many years to come and continue to put Meghalaya’s map in the Indian football scene.

As XtraTime reports, the three new Mohammedan Sporting foreigners arrived in Kolkata yesterday and while …