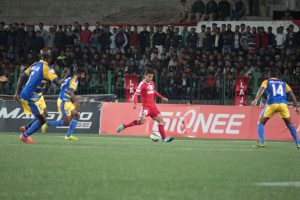 Shillong Lajong FC have emerged triumphant in the final match of the season with a solitary goal from Isaac Vanmalsawma in the 61st minute. The Reds went into the game with a must win objective following their relegation scares but never looked in any danger of losing the game as  they put their foot forward right from the first whistle.

The home side were on the front foot from the start and really tested the East Bengal defence who remained resilient though not allowing a goal to come through. Samuela found himself on the left flank on the 7th minute and fizzed the ball across the 6 yard box but there was nobody inside the box to meet with cross. The first real scare chance for the home side could not be capitalised and they found themselves with another similar chance just 3 minutes later in the 10th minute when Fabio this time was the man with the cross. After Penn Orji had released a pin point accurate long ball from the centre of the field to the Brazilian, Fabio then fired a low cross across goal but again this time there were no Red shirts inside the box who could find the finishing touch.

That was to be the final clear cut chance in the first half hour of the match as the game settled down with both teams content with keeping possession and waiting for the crucial opening. As the match was played mostly in midfield, the visitors somehow managed to squeeze a corner out from the left flank. As the corner was curled in, Ranti Martins who has been in good goal scoring form though did not find the back of the net from what looked like a clear opening from point blank range. The forward headed the ball over the bar much to the delight of the home fans. That was the closest the visitors ever came to scoring in the first half.

Lajong then got one more good chance on goal when Samuela made a good run into the box only for him to not find the final touch as he was stretching. Fabio and Isaac combined with some good link up play down the right hand side and Fabio was left alone but his cross was just too hard for Samuela. The game then went into the break with both teams not capitalising on their chances but still content with the goal less scoreline.

The second half was a much closer contest between the both sides as there were enough chances falling to the sides to take the lead but again both sides’ forward lines did not find their chance to score. The match was played out with the scores all squared up until the 61st minute when the home side finally found the breakthrough. At only 22 years of age, Lajong Youth Academy Midfielder Isaac made a good run down the left flank and just when it looked like he was cueing up to cross, he fired a sizzling shot that looked like a pass for Brazilian forward Fabio Pena but Pena left the pass to distract East Bengal custodian Rehenesh TP and the low pass found the bottom corner to give the home side the much needed goal. It looked like the relegation scare was off as Isaac found the breakthrough and sent the crowd into a wild frenzy.

The home side sat back and defended pretty well to make sure they see out the lead and secure their spot for another season in India’s premier Hero I-League even though East Bengal did manage to create a few half chances towards the end of the match. The goal though confirmed Lajong’s position in the I-League for next season towards the end as even if the visitors found the equaliser, a draw would still be enough for the home side.

The final whistle then was blown with much jubilation for the home side as they celebrated their crucial win that saved them from the clutches of relegation. The Reds completed their dramatic fight back on home turf, completing the season on 18 points from 16 games to finish at 6th position in the Hero I-League table. The visitors though who were looking for a win for their new manager Trevor Morgan who was taking charge for his first game did not collect a point in Shillong but still finish third in the table with  25 points.