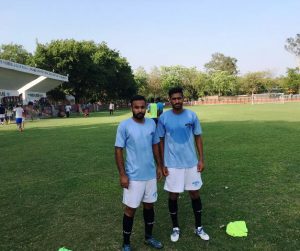 Minerva Academy FC came into the fray of Second Division League with a solitary goal to snatch the gate pass to Hero I-League and right now they are just one step away from it. On the last hurrah to accomplish the goal, they have to outwit none other but Dempo SC, without doubt the most successful club in India, at their den.

Coach Surinder Singh will look forward to the tethering services of Sehijpal Singh and none but the skipper Simranjeet Singh later today to etch the historical chapter of the Punjab-based club’s history. The Punjab-da-puttars have already earned many a plaudit for their sublime scoring ability as well as ice-cool nerves to take the matches by the scruff of the neck. The attacking duo of the Chandigarh outfit joined I-League Media for a freewheeling chat before the D-Day of Second Division League.

Simranjeet, how did you motivate yourself before joining a Second Division League team?

SMS: See, I have already played in I-League for a significant time of my career before joining Minerva Academy FC. I have known Ranjit Bajaj for a considerable time and actually, we used to play together in the wee days of my career. Hence, when he approached and discussed his plans, we couldn’t afford to turn down the proposal.

Most of your fellow teammates are naive in professional football. What’s your actual role as the senior custodian of the team?

SMS: We are a team in true sense. We stay under the same roof, we share our thoughts every time. It’s nothing but an extended family. The atmosphere of Minerva Academy FC dressing room is very pleasant and I have no added pressure to keep the dressing room ideal for football.

Do Ranjit Bajaj lend a hand to fix the team strategies before a match?

Was Football the default career option for you?

SPS: Football was the only sports to which I had access since my day one. In our village, other sports weren’t so popular.

SMS: I hail from Gurdaspur, which is the hotbed of footballers. Myriads of Gurdaspur-born footballers have represented the nation before. The urge to emulate those heroes has pushed me always.

You have already scored 4 goals in the Second Division League so far. Are you gearing up to score more goals in Hero I-League, once you qualify?

SMS: (Laughs), obviously, why not! Joke apart, Minerva Academy are on the verge of making history and who knows we might be the surprise package in the next season of Hero I-League. 90 minutes are there between the summit and us, we have to keep our focus straight and accomplish the target.

Had there been any change in your training regime after you topped the Western Conference?

SPS: Since day one, we are undergoing through Army training (Laughs)! There have been a few alterations in players but training procedures have been mostly same.

Leicester City has been a talking point for quite a time. Have they been a motivating factor for the Minerva boys too?

SMS: Yeah obviously. Winning the EPL by a team who were fighting to the relegation battle last season is nothing less than a fairytale and Vardy, Mahrez and their team have written a lambent lesson in English Football. Who knows Minerva Academy FC might ink another golden chapter in Indian Football history!