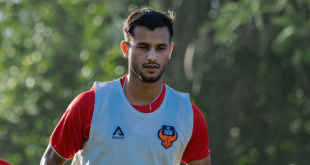 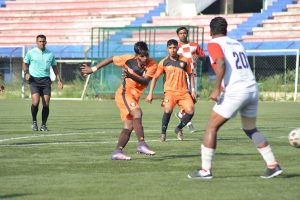 The 6-0 scoreline was an accurate reflection of an immensely one-sided tie as South United FC ran away with six goals without reply from CIL who struggled to get a foot in the game.

An early goal kicked off the game on the right note for SUFC as Manivannan found the back of the net from close range to give them the lead in the 3rd minute. Most of the first 45 minutes was spent with CIL camped in their own half defending South United’s attacks.

With better finishing, South United FC should have been at least 3 goals ahead in the first 15 minutes, but their touch in front of goal failed them on many an occasion. The second goal came in the 26th minute through a defensive error and Kishori was on hand to capitalise and put it past the CIL keeper who found himself in no man’s land.

The second half wasn’t too different from the first as South United kept a strong hold on the game, but CIL seemed to show more grit. They proved a much tougher nut to crack in the second half but Kishori was on hand again in the 62nd minute to make the score 3-0. That goal opened up the floodgates for South United FC as 6 minutes later the substitute Riswanali added to the scoreline.

Kishori topped a great team performance with a hattrick which he completed in the 78th minute. South United weren’t finished though, they found a goal in the 90th minute through midfielder Thapa who finished form inside the box as a wayward ball arrived at his feet.

A dominant performance to end the Bangalore Super Division 2018/19 season for South United FC was just what the doctor ordered for them as they gear up to compete in the Second Division League. 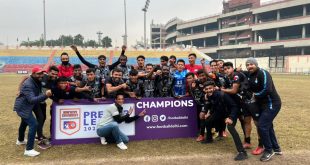 After seven successive wins, a 1-1 draw against Garhwal FC was enough for Delhi FC …