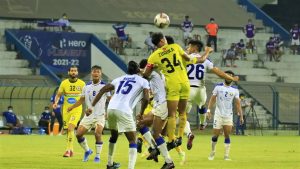 Sudeva Delhi FC nabbed their third win in four games after defeating Real Kashmir FC at the Kalyani Stadium. Real Kashmir were missing several players including skipper Mason Robertson and were unable to keep Sudeva Delhi at bay as the latter secured all three points.

In the opening stages of the game, Real Kashmir spent most of the time in Sudeva Delhi’s half. Malemngamba Meitei saw a lot of the ball on the right flank as he tried to pick out Bernard Kouassi with a cross but could not find the striker after multiple attempts.

A rare attack from Sudeva Delhi saw them earn a penalty at the other end. Youngster Shubho Paul was brought down in the box by Rishik Shetty. Paul stepped up to take the penalty and managed to send Bilal Khan the wrong way to give Sudeva Delhi a lead out of nowhere.

Another penalty was awarded, this time to Real Kashmir after Meitei whipped in the ball from a free-kick towards Kouassi. Chaotic defending in the box saw the ball come off the arm of Sairuatkima. Kouassi stepped up to take the shot from the spot and just managed to beat Sachin Jha, who had dived in the right direction, to level it all up.

Minutes after equalising, Kouassi was sent on a darting run down the right by Zahid Yousif. The Ivorian used his physique to beat Sairuatkima in the box and ended up rattling the crossbar from an acute angle.

Sudeva Delhi started the second half on the front foot. Abhijit Sarkar curled a beautiful low shot towards goal but it was well-saved by Khan and put behind for a corner. Real Kashmir were clearly missing quite a few of their players who were unavailable for this game as they could not retain possession for a long time.

Frustration did not last long for Sudeva as skipper Vanlalzuidika Chhakchhuak popped up with their second goal of the evening. William Pauliankhum put a cross into the box from the right. Nishchal Chandan got his head to it and knocked it right into the path of Chhakchhuak, who dodged a tackle from Shetty and scored easily from close range.

Into the last ten minutes of the game, Bikramjit Singh curled a ball into the box and Pratesh Shirodkar’s glancing header flew wide. At the other end, Neihsial almost wriggled past the Real Kashmir defence but was halted by Abhash Thapa before he could do any more damage.

The win boosts Sudeva Delhi straight up to second place in the Relegation Table, only two points behind leaders Aizawl FC and two clear of TRAU in third. After this loss, Real Kashmir extended their winless streak to nine games. They are now fifth in the table, four points clear of Kenkre FC.