Tactical battle on the cards as Bengaluru FC take on ATK!

Press Release 2020-02-29 Indian Super League Comments Off on Tactical battle on the cards as Bengaluru FC take on ATK! 347 Views 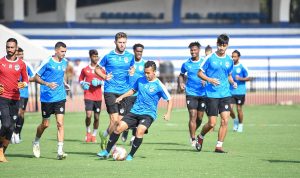 Bengaluru FC will look to keep intact their dominion over opponents in the home leg of semifinal fixtures when they take on Kolkata side ATK in what promises to be a battle of tactics in the Indian Super League at the Sree Kanteerava Stadium on Sunday. Carles Cuadrat’s men will been keen on making the trip to Kolkata next week, armed with an advantage, but will have to match the occasion with a big performance.

The two teams played each other at the same venue less than ten days ago in what was their last fixture of the league stages. But the stakes have risen considerably since then for both Carles Cuadrat and Antonio Lopez Habas’ men. Cuadrat billed both teams on either side of the semifinal bracket as being those with similar styles of football.

“Both semifinals are being played by teams with a similar style of football. Chennaiyin and Goa both like to attack while us and ATK both rely on defence and it will be a very tactical battle between the teams at this stage of the competition,” Cuadrat said.

Bengaluru FC will hope that their watertight defence that has conceded the least number of goals (13) in the league stages this season, turns up yet again to quell the threat that ATK’s attacking duo of Roy Krishna and David Williams possess. Between them, the Fijian and Australian have racked up 19 goals and 9 assists, and are lethal on the counter, to say the least. However, Krishna, second on this season’s goal scoring charts with 14 goals, has fired blanks against Bengaluru FC in both league-stage games.

With ten clean sheets to his name, Gurpreet Singh Sandhu has clung on the Golden Glove band with ATK’s Arindam Bhattacharja in close pursuit. And the Blues’ keeper has benefitted from the defensive screen that Juanan Gonzalez, Albert Serran and at times Rahul Bheke have formed in front of him.

The visitors have themselves kept things tight at the back and along with Bengaluru FC, are the only other side to have conceded less than 20 goals in the league stages of the competition. And Bengaluru FC, who haven’t exactly been fluent in front of goal, will have their task cut out. In an encouraging sign for the hosts, Jamaican striker Deshorn Brown has been in good goalscoring form, having scored twice in the league and four times in the AFC Cup since joining the Blues in January.

A slightly worrying factor for the Blues though is the burnout to few key personnel who were involved in a mid-week AFC Cup clash that went into extra time. “I think it was unfortunate that we had to play thirty more minutes of football over the ninety on Wednesday. A few players who were on the pitch through that game will be taking the field again on Sunday, but it’s a situation we have to manage. The good thing though is, our players are ready physically and we haven’t sustained too many injuries,” said Cuadrat.

Cuadrat also confirmed that skipper Sunil Chhetri, who has been recovering from a hamstring strain and came on in the second half of Wednesday’s game, was fit to take on ATK. “Sunil wasn’t expected to play as many minutes as he did against Maziya, but he will be ready for Sunday.”

Over the last two seasons, the Blues have played the second leg of the semifinal at home and have got the job done with much ease, beating FC Pune City 3-1 in 2018 and NorthEast United FC 3-0 the following season. Asked if playing the home leg first this time would be a disadvantage this time around, Cuadrat felt otherwise. “In the end it’s going to be about 180 minutes of football. We played the second leg of our AFC Cup play-off stage game at home and it didn’t work out for us. We will have our fans backing us on Sunday and all I can say is that we will do everything we can to make it to the final.”