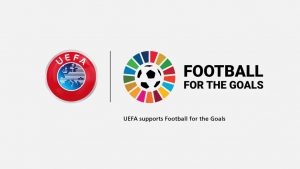 Today, on the first day of UEFA Women’s EURO 2022, the United Nations is launching Football for the Goals, a new United Nations initiative that provides a platform for the global football community to engage with and advocate for the Sustainable Development Goals (SDGs). UEFA, which unveiled in December 2021 its own sustainability strategy “Strength through Unity” focusing on human rights and the environment, joins the initiative as its inaugural member.

A UN-led and managed initiative, Football for the Goals (FFTG) will tap into the power of football, not only in raising awareness and recognition of the SDGs, but to achieve behavioral change and sustainable practices in the football industry and to inspire the game’s global fan-base.

FFTG launched with a virtual event today at 14:00 CET featuring a conversation between UN Deputy Secretary-General Amina J. Mohammed and UEFA President Aleksander Čeferin, which is available on the UEFA Media Channel and on the UN YouTube platform.

Football stakeholders – from confederations, national associations, leagues and clubs, to players, players’ associations, fan groups, as well as media and commercial partners – are invited to join FFTG and become active agents of change by committing to adopt the principles of sustainable development and human rights, develop sustainable business practices and act as SDG champions. Members will use their visibility and outreach power via tournaments, players, corporate brand exposure, media and fan communities to raise the profile of the SDGs through amplification and advocacy. Through their commitments, they will raise awareness of the SDGs and demonstrate how sustainable practices can be mainstreamed through any business model, including sport.

To highlight the applicability of the commitments outlined in FFTG, the Football Association of Norway is launching a pilot project demonstrating how its national teams, grassroot football and leagues, and their media partner, will work together to support the Sustainable Development Goals (SDGs) in football, and it will work closely with the United Nations to share the results with those interested in joining FFTG.

Those interested in joining the initiative and committing to a sustainable future are encouraged to learn more at the  Football for the Goals webpage.

Amina J. Mohammed, Deputy Secretary-General of the United Nations, said, “The United Nations recognizes the powerful voice football carries in the global community and the role football can play in raising awareness for the SDGs through the popularity of the game. Not only is football the most popular sport in the world, it is also the most accessible. All you need is a ball for people to come together. Every day, millions of people all over the world play the game, whether on a makeshift field, in a school yard or in a giant stadium. That’s why we are excited and proud to launch this initiative. Football for the Goals offers a unique opportunity to raise awareness and galvanize the world into action on the SDGs. We are grateful to UEFA for their commitment as the inaugural member of this initiative and we look forward to many others in the football community joining this effort worldwide.”

Aleksander Čeferin, UEFA President, said, “I am pleased that the United Nations recognizes the powerful voice that football carries in the global community and the role we can play in raising awareness of the sustainable development goals through the game’s popularity. UEFA, as an inaugural member of Football for the Goals, aspires to take a leading role as an exponent for change in sports by contributing to the promotion of sustainable development and introducing more sustainable business and operating models to the football industry. I am convinced that if football comes together and bundles its power to drive sustainable change, it will be able to have a strong and long-lasting positive impact. As UEFA, we must set the right example towards sustainable change and inspire others to follow.”

Football for the Goals follows successful collaborations between the United Nations and creative agencies, media organisations, and the publishing and the mobile industries, among others, to promote action on the SDGs. For UEFA, FFTG further strengthens and deepens its already existing institutional relationships with the United Nations system, such as with the UN Office at Geneva (UNOG) and the UN High Commissioner for Refugees (UNHCR), but also with the UN Economic Commission for Europe (UNECE) or the UN World Tourism Organization (UNWTO).