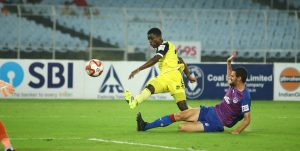 Hyderabad FC’s impressive Durand Cup campaign came to an end at the Saltlake Stadium on Thursday as Manolo Marquez’s men fell to a 0-1 defeat in the hands of fellow-Indian Super League side Bengaluru FC in the semi-finals of the prestigious competition.

Odei Onaindia’s unlucky own goal (30’) was the solitary goal in this clash as Bengaluru FC advanced to the finals of the competition.

Both coaches put out strong teams in search of their maiden Durand Cup final appearance and it was Hyderabad FC who were on the front foot right from the first whistle.

Bengaluru FC struggled to keep up with the pace of the game but against the run of play, got themselves ahead thanks to the own goal. Prabir Das’ cross was too good for our centre-back pairing and the ball went in off Odei, who was left helpless.

The likes of Bartholomew Ogbeche, Joel Chianese, Javi Siverio, Halicharan Narzary, Borja Herrera and Lalchungnunga Chhangte all had their chances in front of goal but Hyderabad found it difficult to test Gurpreet Singh, who was well marshalled with two lines of defence in front of him.

Bengaluru FC, who took the lead just half an hour into the game, made sure that they disturbed any rhythm Hyderabad FC were finding, as they constantly slowed the game down in a bid to see out their tender lead.

Manolo Marquez’s substitutions did trouble the hosts, but with almost every outfield player from Bengaluru FC taking turns to stay down for every tackle, the game hardly had any flow to it, especially in the second half.

Anuj Kumar, who made his debut for Hyderabad FC, was hardly troubled but Bengaluru FC’s game plan worked to the tee and it was Hyderabad FC who were at the wrong end of the result.

This was Hyderabad FC’s first ever semifinal appearance as Manolo Marquez’s men continue their preparations for the Indian Super League set to commence next month.