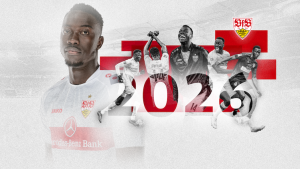 Silas Katompa Mvumpa is extending his stay in Stuttgart, with VfB Stuttgart adding an extra two years onto his contract. The 24-year-old originally had a deal that ran until June 30, 2024, but he is now tied to the club through to June 30, 2026.

The attacker joined VfB Stuttgart in summer 2019 and has gone on to make 83 appearances in the Bundesliga, Bundesliga 2 and DFB Cup. During that time, he has scored 25 goals and set up 15 more.

“We’re delighted that Silas has penned an early extension to his contract with us,” said VfB Stuttgart sporting director Fabian Wohlgemuth. “With his speed and goal threat, Silas plays an important role in our attacking play. He has plenty more potential in him, and we intend to develop that with him over the coming months and years.”

“I would like to thank the VfB management for the faith that they have shown in me,” said Silas. “I feel very much at home here. The club is providing me with an excellent environment to improve myself further and I want to enjoy success with VfB Stuttgart and their wonderful fans.”