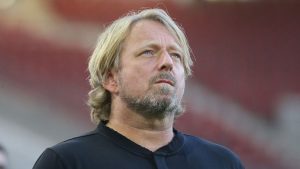 VfB Stuttgart and its sporting director Sven Mislintat have decided to go their separate ways.

The decision comes following several days of talks between the management board, Mislintat and the VfB supervisory board. Mislintat rejected the opportunity to sign a contract extension which VfB felt was in line with the current market. He will leave VfB on November 30, 2022 after three and a half years at the club, and his contract – which was due to expire in June 2023 – will be terminated by mutual agreement.

Alex Wehrle, VfB CEO said, “Sven has decided not to accept our contract offer, which we regret. Ending the negotiations now is a mutual decision made by everyone involved, but it doesn’t change our mutual appreciation for one another. Sven Mislintat was part of our team for three and a half years and has always been passionately committed to VfB. We owe him our thanks and our respect for his efforts. Sven Mislintat will always be welcome in Stuttgart and at VfB.”

Sven Mislintat said, “During our discussions, we failed to find common ground to continue my work at VfB. I regret that very much because VfB has become a real labour of love for me in recent years and I’d have liked to continue to play my part in the positive development of this great club. I’ll never forget my time in Stuttgart – emotional highlights like our promotion or the last-minute victory on the final day of last season will stay with me forever. I thank everyone who accompanied and supported me on my journey, and wish the team and the great fans all the best.”

VfB Stuttgart will make the necessary personnel decisions before the resumption of training on December 12 in order to start the second half of the season in a strong position.