VIDEO: AIFF president Kalyan Chaubey: We will take Indian Football forward together with all stakeholders involved!

Arunava Chaudhuri 2022-09-03 General Comments Off on VIDEO: AIFF president Kalyan Chaubey: We will take Indian Football forward together with all stakeholders involved! 718 Views 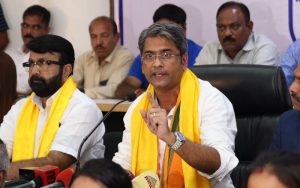 The newly elected President of the All India Football Federation, Kalyan Chaubey, said that he “will engage with all stakeholders to take Indian Football Forward Together.” Mr. Chaubey was speaking to the media at Indian Football Headquarters, Football House after being voted the new AIFF President on Friday on September 2, 2022.

“At the outset, we will work on a short-term plan, and will then meet in Kolkata later this month,” he informed. “We have fought in the Supreme Court together for the last 19 months, and it has taken up a lot of time, effort, and resources from everyone to reach this stage,” he added.

While Mr. Chaubey was elected the President, Mr. NA Haris and Mr. Kipa Ajay were elected as the Vice President and Treasurer, respectively, along with 20 Executive Committee members (14 from State Associations and 6 co-opted former eminent players).

“I want to involve all eminent footballers to work on the different challenges Indian football is facing today, and to realise the dreams of the respective states. After 100 days, we plan to unveil the roadmap for Indian Football and take the next step,” he averred.

After being elected President, Mr. Chaubey also revealed that he had received a call from the FIFA President Mr. Gianni Infantino.

“I received a call from the FIFA President. He wanted to meet me in Zurich or Doha later this year. I briefed him the importance of the next few days. We have the FIFA U17 Women’s World Cup India 2022 next month, and told him that we need to discuss amongst ourselves how we plan to take things forward. We will then present our plans to him in detail,” Chaubey said.

“The FIFA President also told me that he was impressed with our honourable Prime Minister’s interest in Indian Football, and the support Shri Narendra Modi-ji has been extending to the sport.”

“We plan to reach out to various schools to extend our outreach at the grassroot level. Hence, we will also have detailed discussions with Sri Anurag Thakur ji (Minister of State for Ministry of Youth Affairs and Sports, and Minister for Information and Broadcasting), Shri Dharmendra Pradhan-ji, and the HRD Ministry.”

The President also spoke about his rival in the election, former India footballer Bhaichung Bhutia, saying his views are also welcome in the efforts to take Indian Football ahead. “Bhaichung’s contribution to Indian Football can never be forgotten. I will definitely welcome his views, and take everyone’s views into consideration.”